Weight gain and loss of energy are common anecdotal complaints found in the oral history, so we turn now to the study of fat tissue. Mammals have two types of fat tissue, White Adipose Tissue (WAT) and Brown Adipose Tissue (BAT). WAT is located primarily under the skin surface and serves to store energy, and as a layer of insulation against the cold. BAT is found in deeper nooks and crannies, and is a prime source of generating heat energy (thermogenesis). BAT will be discussed in the section on thermoregulation.

The control center maintains homeostasis in adipose by altering energy intake and energy expenditure. WAT is able to store excess energy when food is abundant, and make that energy available when food is scarce. WAT stores energy in the form of molecules called lipids. Each individual white adipose cell can shrink or grow, depending on whether lipids are being burned or deposited. The size of the fat cell is known simply as “Fat Cell Size” or FCS. The body can also create new fat cells, and we can count them and call that “Fat Cell Number” or FCN.

Lipogensis is the deposition of fat. It is accomplished by depositing more lipid in each cell, increasing the FCS; and by creating brand new adipose cells, increasing the FCN. Lipolysis is the chemical decomposition and release of fat from adipose tissue, otherwise known as “burning fat”. 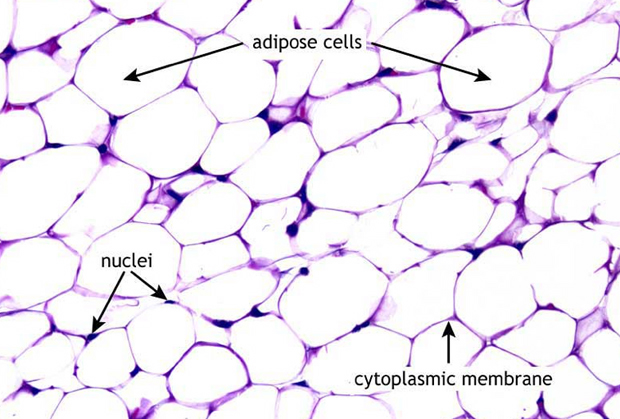 
Robert Bowers, head of the Molecular and Cellular Biology and Pathobiology Program, at the Medical University of South Carolina, heads up a world-wide research team studying the metabolism of adipose tissue. Bowers and colleagues warn that “Prolonged positive energy balance promotes obesity that in humans is associated with a number of health risks. The deposition of lipid initially results in increases in fat cell size (FCS), but soon triggers increases in fat cell number (FCN)” (Bowers et al. 2004, see also Satcher 2001)


“The accretion of lipid in and of itself is not necessarily associated with these health risks (see Simms 2001); rather it is the distribution of body fat that is critical (see Gasteyger et al. 2002). That is, visceral obesity is closely associated with development of the “metabolic syndrome” and type II diabetes (see Vague 1980). Thus understanding how body fat is preferentially deposited and mobilized is necessary for the prevention and treatment of obesity, respectively.” (Bowers et al. 2004)

Could ETS surgery affect adipose metabolism? If so, how? To begin answering, we first ask, “Does the SNS run to adipose tissue?” Yes, it does. “White adipose tissue (WAT) is innervated by the sympathetic nervous system (SNS)”. (Bowers et al. 2004). Brown adipose is also sympathetically innervated, and will be discussed under thermoregulation. .

The sympathetic nervous system evidently plays a dominant role in the regulation of fat burning, and adipose function in general. In their 1994 study of lypolysis [fat burning] in humans, researchers at University College London stated: “Catecholamines are powerful regulators of lypolysis. In both in vivo and in vitro studies, stimulation of adrenoreceptors in adipose tissue (from at least some sites) dominates over alpha 2-adrenoreceptor inhibition of lipolysis. Catecholamines may reach adipose tissue via the general circulation or via the rich sympathetic innervation”. (Coppack et al. 1994)

Back in the 1990’s, the London researchers observed, “It is apparent that lipolysis is controlled largely by sympathetic activity and insulin concentrations.” (Coppack et al. 1994). By 2004, consensus had become even clearer, allowing Bowers to state unequivocally in his introduction, “Although the more established role of this sympathetic innervation of WAT is as a major stimulator of lipid mobilization, this innervation also inhibits WAT fat cell number (FCN); thus, local [sympathetic] denervation of WAT leads to marked increases in WAT mass and FCN.” (Bowers et al. 2004)

The purpose of Bowers’ study then is just to further quantify what is already known. Bowers shares our suspicions about this dominant role of the SNS: “One mechanism that may underlie the differential accumulation of lipid by WAT depots, as well as the differential mobilization of lipid, is through its innervation by the sympathetic nervous system (SNS) and the effects of its primary postganglionic neurotransmitter, norepinephrine (NE)”. (Bowers et al. 2004).

All of this allows the CS model to generate two more predictions about thoracic sympathectomy in humans:

To satisfy his curiosity, Bowers and colleagues set about doing sympathectomies on hamsters. The results? “[Sympathetic] denervation produced significant increases in WAT mass and FCN” (Bowers et al. 2004). Below are graphs summarizing their findings. “R” WAT and “I” WAT refer to adipose tissue in two different body locations. “R” stands for “retroperitoneal”, which means in the abdominal cavity, “I” stands for “inguinal” which means in the groin area. 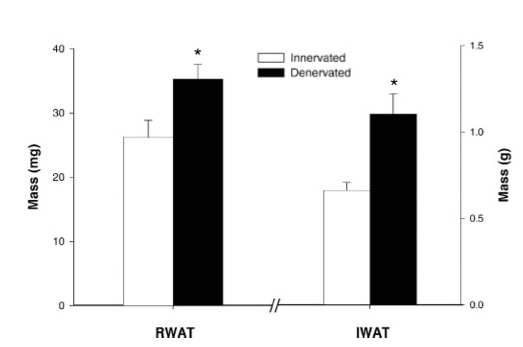 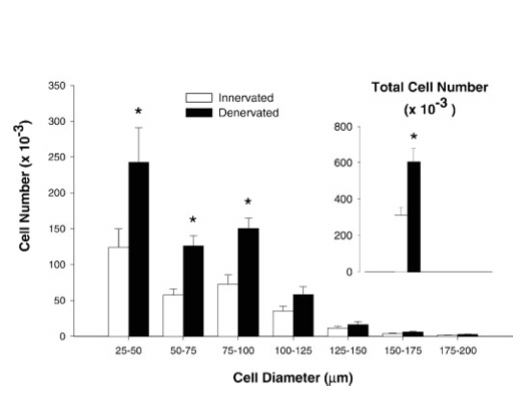 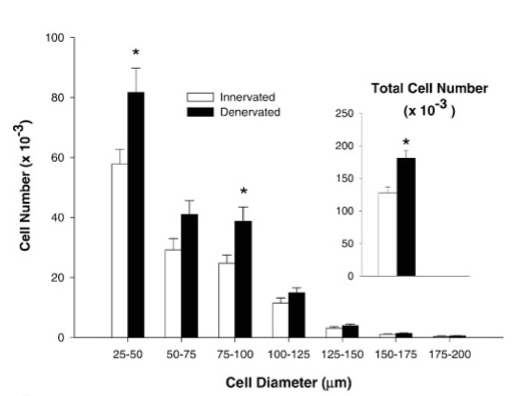 
Clearly, sympathectomy caused a great increase in the mass, the size and the number of fat cells in these mice.

The denervation of white adipose tissue produced by ETS surgery will likely follow the same patterns as the skin, since a good deal of it is located directly under the skin. Pattern I corposcindosis then would entail sympathetic denervation all the WAT from the chest upwards. It would also lower the catecholamine levels in the blood, as shown earlier. Thus both sources of lypolysis stimulation, neural and hormonal, will be affected by ETS surgery. However, most of the body’s adipose lies below the chest, and would remain innervated, and potentially hyperactive.

We call for study of the effects of ETS surgery on lipolysis and lipogenesis in humans. Based on animal studies and the anecdotal oral history, there is compelling reason to do so. Until then, ETS remains experimental with regard to adipose. Patients should be warned as such and informed of the likely effects, based on theory and animal data.

In the early 1990’s some very important discoveries were made about fat metabolism – the discovery of the ob (obesity) gene, and of “leptin”. Leptin is a peptide released by adipose tissue into the blood stream. Leptin will travel to the hypothalamus and bind with receptors there. Thus, leptin acts as another input to the control center. Sufficient leptin in the blood tells the control center “enough storing of fat”. There is a great deal of interest in leptin studies currently, because mice given extra leptin lose a lot of body fat. However, great caution is in order, because not only does leptin have a key role in the regulation of fat metabolism, it turns out to be essential to bone metabolism as well.
Posted by Alexander Baker