Blood vessels are surrounded by a layer of smooth muscle. Contraction of this smooth muscle will constrict the vessel; relaxation will dilate the vessel. The control center achieves this via the sympathetic nervous system, as nearly all blood vessels lack parasympathetic innervation. An exception to this are vessels in the sex organs, which do indeed have both types of ANS nerve fibers.
As usual, the control center is trying to maintain homeostasis. By selectively constricting and dilating blood vessels, the body is able to redistribute blood flow. It does this in response to various stress inputs including temperature, emotion, exercise, and sexual arousal. 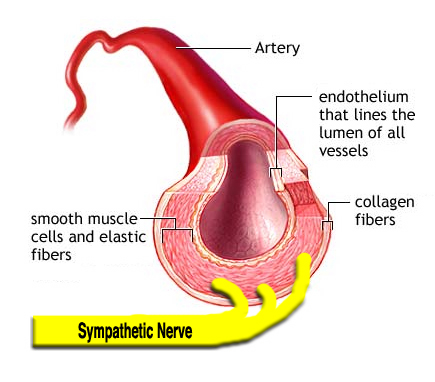 The Structure of a Typical Artery, and Schematic Representation of SNS Innervation

Researchers have compared the effects of sympathectomy to disease states:

Not surprisingly, diminished vasoconstrictor responses, similar to the current ﬁndings, have been found in patients with sympathetic dystrophies, dysautomias, post-regional sympathectomy, and diabetic neuropathies. (Littleford 1999).


Before we make predictions, there is a mystery to solve. We know that during exercise, blood flow is diverted away from the skin and into deep muscles. But how? The increase in sympathetic tone explains the constriction of the small surface vessels, but why do the large vessels deep in the skeletal muscles dilate at the same time? We should think an increase in sympathetic outflow would constrict them also. To begin unraveling the mystery, consider this from Phillip Clifford and colleagues:

“It may not be widely appreciated that blood flow to skeletal muscle subserves two important, but potentially conflicting functions: oxygen delivery and blood pressure regulation. Vasodilatation to enhance blood flow and oxygen delivery appears to be a local phenomenon although the specific mechanism underlying exercise hyperaemia (increased blood flow) has been an unyielding enigma despite intense research efforts spanning the last century.” (Clifford, et al. 2002) 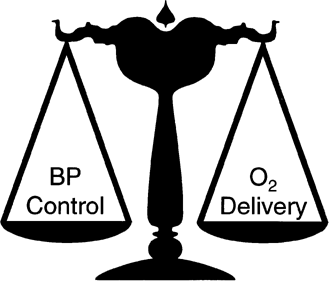 
What is this local phenomenon that can override the increase in sympathetic tone, and allow deep blood vessels to dilate during exercise? Clifford’s team has the answer, and it is Nitric Oxide, or NO. Their article title may be among the most clever in a medical journal: “Attenuated sympathetic vasoconstriction in contracting muscles: just say NO”. They ran a variety of clinical tests on exercising humans and determined that the release of NO in the exercising muscle will effectively override the sympathetic vasoconstriction and cause blood vessels to dilate.

But what causes this release of NO? For the answer, we turn to a group of Swedish neurophysiologists who wondered the same thing. They directly measured sympathetic activity in human muscles, and nitric oxide release, and concluded: “The data suggest that the stronger the sympathetic activity the higher the release of the dilating substance, nitric oxide.” (Skarphedinsson et al. 1997)

So, now we have a fair understanding of the mechanism by which the control center is able to do this neat trick of diverting blood where it is needed most. And the CS model is able to make some predictions.

"Our data indicate that insulin stimulates blood flow in sympathectomized limbs by a direct action at the vasculature. This effect is mediated by stimulation of NO release and appears to be masked by the sympathetic vasoconstrictor tone in innervated limbs." (Satori1999) 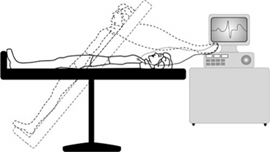 The patient lies on a special table while a variety of sensors are placed. These can include EKG and blood pressure monitors. A special device is placed around the forearm which measures changes in diameter, thus detects changes in constriction/dilation of the forearm blood vessels.

After undergoing a tilt-table test at Dr. Goldstein’s NIH protocol, a T2-T4 ETS patient received the following comment in his official report:

“There was no reflexive vasoconstriction. Interpretation: Absence of forearm vasoconstriction during orthostasis (standing up), consistent with local sympathectomy.” (Goldstein, Neurocardiology Inpatient Evaluation, 2004)

Another troublesome finding was reported back in 1983 by surgeons doing lumbar sympathectomies on humans:


“After unilateral sympathectomy the incidence of calcified arteries on the side of operation was significantly higher than that on the contralateral side (88% versus 18%, p less than 0.01). In conclusion, sympathetic denervation is one of the causes of Monckeberg's sclerosis [calcification of arteries] regardless of diabetes mellitus”. (Goebel et al. 1983)


It took these patients 6-8 years to develop the sclerosis. Why would sympathectomy cause calcification of arteries? The lowered blood level of catecholamines likely has a role, but it also turns out that sympathectomy will increase the amount of calcium lost by bone. This is discussed in the section on bone metabolism.


Diabetes can cause "autosympathectomy", where the body destroys its own sympathetic nerve function in a particular region. The authors of a 2006 study of feet in diabetics noted that, after sympathetic function ceased, that:

Skin ulcers were among the types of dysfunction brought about by loss of sympathetic function.