UCLA surgeon Samuel Ahn has theorized that ETS surgery would affect bone metabolism. At an educational conference in 2005, Ahn said:


“Theoretically, if you cut the sympathetic nerves, you could interfere with bone metabolism . . .The reason I say that is because RSD [Reflex Sympathetic Dystrophy] is an over-activity of the sympathetic nerve. . . and we know that in RSD . . .we get a positive bone scan . . . because the bones are more active. So reverse this. If you take away the sympathetic drive to that bone area, you will decrease that metabolic activity in bone growth. And you could theoretically interfere with the bone metabolism and the bone strength. . .And that has been mentioned in the literature.” (edited for clarity, see Ahn 2005)

Bones remodel themselves continually. They are constantly releasing calcium into the blood, while at the same time forming new bone from within. The cells which release calcium are called “osteoclasts”, and this process is called “resorption”. The cells which lay down new bone are called “osteoblasts”. In addition to laying down new bone, these osteoblasts also have the job of making new osteoclast cells.

As with everything else, the control center is constantly trying maintain homeostasis of bone metabolism. “In the bone microenvironment, there is a dynamic balance between resorption and formation that maintains skeletal homeostasis”. (Kondo et al. 2003) 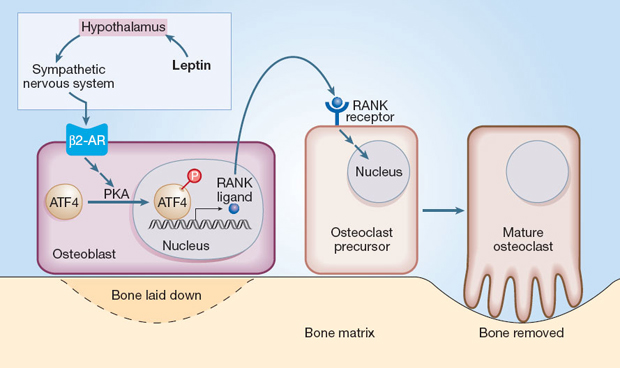 
The control center (hypothalamus) receives signals from leptin in the blood. Acting on this information, it communicates to the osteoblast cells via the sympathetic nervous system.


Ahn’s theorizing turns out to have tremendous merit. The notion that the sympathetic nervous system regulates bone metabolism has become accepted scientific fact. For example:

A team of Norwegian scientists put it this way: “Sympathetic nerves are known to modulate bone resorption and bone remodeling.” (Bletsa 2004, emphasis added)
Thus it appears obvious that sympathectomy is going to alter bone metabolism in some way, the question is, how exactly? And, it would also be nice to know which bones, exactly, become denerved in thoracic sympathectomy. There appears to be a great lack of empirical data on patterns of SNS innervation to bone and bone marrow. More research is called for, and patients should be warned about potential changes in bone metabolism before consenting to ETS surgery. 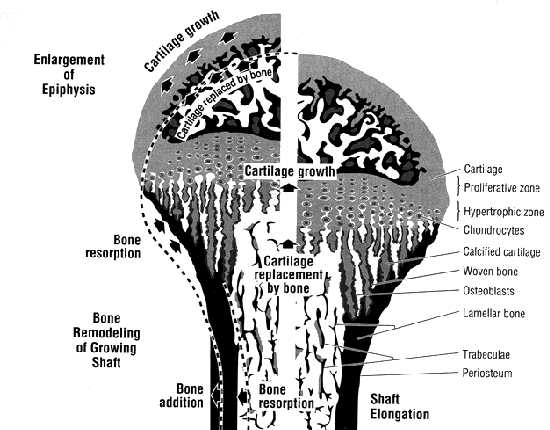 Does bone denervation follow the skin pattern, thus denerving the top 1/3 of the body’s bone mass? It seems certain that all bone in the arms and hands would have to be denerved. But perhaps the skull, jaw, ear bones, and/or teeth receive sympathetic innervation from somewhere above T2-T4. More data are sought.

“The distinct effects of SP and catecholamines on the bone cells together with their in vivo influences manifested by experimental denervation studies suggest that the sensory and sympathetic nerves play important roles in bone metabolism.” (Imai et al. 2002)

Yes, but what, exactly, is going to change about bone function in the denerved area?


“Sympathectomy increases bone resorption in gerbilline middle ear bone” (Sherman et al. 2001).
Considering Sherman, a group of Norwegian orthodontists wanted to learn about resorption of teeth, so they performed sympathectomies on rats, (and gave them braces!)

If sympathectomy changes bone resorption, how might it affect other aspects of bone metabolism?

“Cytokines” are chemical messengers of the immune system, for example interluken, and tumor necrosis factor (TNF). Tumor Necrosis Factor helps kill tumors. Could sympathectomy affect the production of cytokines? The Norwegian orthodontists wondered the same thing, so the following year they did more rat sympathectomies to look for changes in the production of cytokines Interlukin 1 alpha and TNF alpha in their teeth.

“This study suggests that sympathetic nerves have an inhibitory effect on IL-1alpha . . .and a stimulatory effect on TNF-alpha in the intact rat pulp.” (Bletsa 2004)

Leptin is a hormone released by fat cells into the blood stream. It acts as a chemical messenger by interacting with receptors in the hypothalamus. Enough leptin in the blood tells the control center “we’re full, stop eating”. But leptin also regulates bone metabolism.

Leptin regulates bone metabolism via the SNS, this much is clear. It has been suggested that perhaps there is a negative feedback loop, wherein the reverse is also true. Perhaps the SNS also is able to regulate leptin production in some way. Some doctors at a VA hospital in Iowa thought so, and reported in their 2003 paper “There is evidence that sympathoadrenal stimulation inhibits leptin mRNA expression and secretion from white adipose tissue through beta adrenergic mechanisms.” (Mark et al. 2003)


What is the effect of leptin on bone metabolism? “Leptin is a powerful inhibitor of bone formation in vivo.” (Elefteiou et al. 2004). This would tend to reinforce the bone resorption increase already noted. Calcium lost form bone must go somewhere, and that somewhere is into the blood. Considering this extra calcium, and considering the lowered blood catecholamines, we can offer the next prediction.

Back in 1983 a pair of surgeons were experimenting using lumbar sympathectomy to treat the circulation problems associated with diabetes. After 6-8 year follow up, they discovered that sympathectomy was causing a severe calcification of the arteries, a condition known as “Monckeberg’s Sclerosis”. It became especially clear to them because they had a number of patients who had only been sympathectomized on one side, and the incidence of the calcification was far higher on that side.

“After unilateral sympathectomy the incidence of calcified arteries on the side of operation was significantly higher than that on the contralateral side (88% versus 18%, p less than 0.01). In conclusion, sympathetic denervation is one of the causes of Monckeberg's sclerosis regardless of diabetes mellitus.” (Goebel et al. 1983, emphasis added)

2006 saw the publication of an article entitled “Signals from the Sympathetic Nervous System Regulate Hematopoietic Stem Cell Egress from Bone Marrow”. Hematopoietic stem cells and progenitor cells, or HSPCs, are the precursors for red blood cells. We learn from the paper that “Hematopoietic stem and progenitor cells (HSPCs) reside in specific niches that control survival, proliferation, self-renewal, or differentiation in the bone marrow (BM). The sympathetic nervous system regulates the attraction of stem cells to their niche.” (Katayama, et. al. 2006, emphasis added).