We spend our entire lives inside a narrow range of internal body temperatures. Humans cannot tolerate internal temperatures below 95˚ F or above 105˚F for very long at all. Maintaining core body temperature homeostasis is a key responsibility of the control center. How does it manage this?

Penn State University physiology professor W. Larry Kenney has given a magnificent treatise on Human Thermoregulation. Kenney describes the mechanisms by which the human body gains and loses heat:


“By far, the largest source of heat imparted to the body results from metabolic heat production (M). Even at peak mechanical efficiency, 75 to 80% of the energy involved in muscular work is liberated as heat. At rest, a metabolic rate of 300 ml per minute creates a heat load of approximately 100 Watts. During steady-state work at an oxygen consumption of 1 l/min, approximately 350 W of heat are generated-less any energy associated with external work (W). Even at such a mild to moderate work intensity, body core temperature would rise approximately one degree centigrade every 15 min were it not for an efficient means of heat dissipation. In fact, very fit individuals can produce heat in excess of 1,200 W for 1 to 3 hours without heat injury (see Gisolfi et al. 1984).

Heat can also be gained from the environment via radiation (R) and convection (C) if the globe temperature (a measure of radiant heat) and air (dry-bulb) temperature, respectively, exceed skin temperature. These avenues of heat gain are typically small relative to M, and actually become avenues of heat loss when the skin-to-air thermal gradient is reversed. The final avenue for heat loss-evaporation (E)-is also typically the most important, since the latent heat of vaporization of sweat is high-approximately 680 W-h/l of sweat evaporated.” (Kenney, emphasis added)

When the environment temperature goes below a certain threshold, the body must take measures to maintain core temperature. It essentially has two strategies for this:
Generating additional body heat beyond that which the muscles release can be accomplished by burning fat tissue, especially brown adipose tissue. How does the control center deliver the message to the brown adipose tissue (BAT) to begin lipolysis?


“The initial event in the stimulation of thermogenesis is the release of noradrenaline from the sympathetic nerves which extensively innervate Brown Adipose Tissue.” (Trayhurn 1993)

So sympathetic innervation is required to trigger thermogenesis, but is it important in the overall process?


“The SNS plays a pivotal role in the regulation of the increased energy expenditure associated with the adaptive response to cold, particularly in relation to the stimulation of thermogenesis in brown adipose tissue” (Trayhurn et al. 1998 emphasis added; see Landsberg et al. 1984).

Besides thermogenesis, the other response to cold is to conserve body heat. The control center does this by constricting surface blood vessels, reducing the surface area exposed to the environment, thus reducing the amount of heat lost due to convection. Under even more extreme exposure to cold, extremity blood vessels may be further constricted, shunting blood and life-preserving warmth into the core.

There are three methods by which body heat can escape into the environment – radiation, convection, and evaporation. Radiation is electromagnetic waves which are given off by all things. If the environment is cooler than the skin, some heat will radiate away, but the body has no control over this.
Convection refers to the heat exchange that takes place between any two things of differing temperature. As with radiation, if the air temperature is below that of the skin, body heat will be lost through convection. The body does have some control over convection, which is the first line of defense against hyperthermia (overheating). Increasing heat loss via convection is accomplished by dilating surface blood vessels. This moves warm blood from the body core out to the skin where a greater surface area is exposed to the air.

However, if the air temperature is too hot, convection (and radiation) will work in the opposite direction, causing the body to gain instead of lose heat. Or, even if the environment temperature is below the skin temperature, the heat generated by metabolic work may overwhelm the ability of convection to sufficiently cool the body down.

In these situations, when convection is not enough, the body must employ what Kenney calls “typically the most important” means of heat loss – evaporative cooling, that is sweating. The control center increases sympathetic tone to the sweat glands, which secrete sweat onto the surface of the skin. As water evaporates into the air, heat is taken along with it. Simple, effective and refreshing.
Consider the following diagram from the Kenney treatise, with added ETS comments in red: 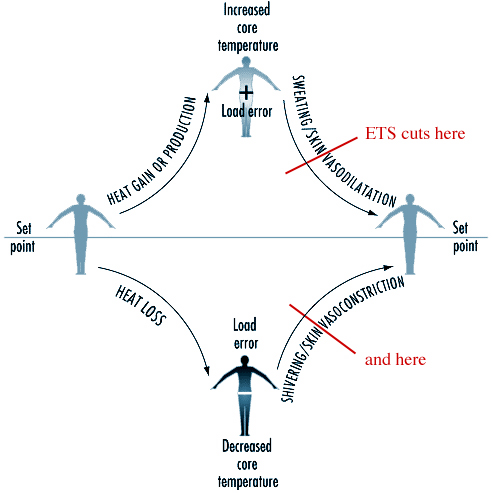 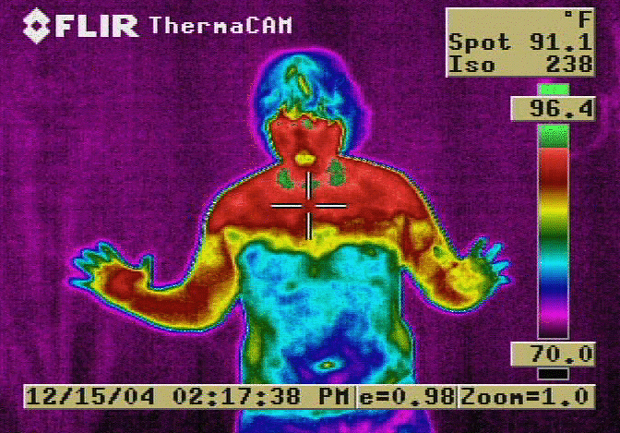 
Pattern I Corposcindosis. The denerved body section above the nipple line is obvious, and shows an abnormal 10-12˚ F difference in skin temperature. Denerved cutaneous blood vessels are unable to constrict, and the upper body acts as a giant heat leak in cold temperatures. The same region is unable to sweat, so any evaporative cooling must come from the other part of the body.


Owing to the simple fact that heat rises, approximately 40% of body heat lost through convection is lost through the head. We can easily surmise that evaporative cooling from the lower body is significantly less efficient than on the head, compounded by the fact that this part of the body is usually covered by clothing. 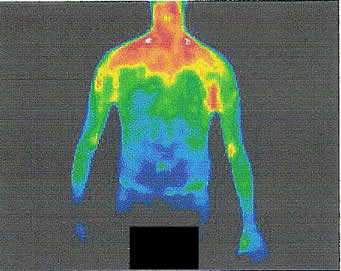 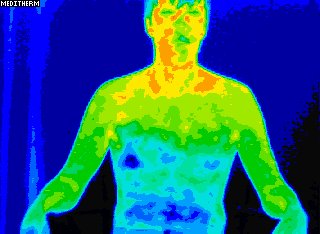 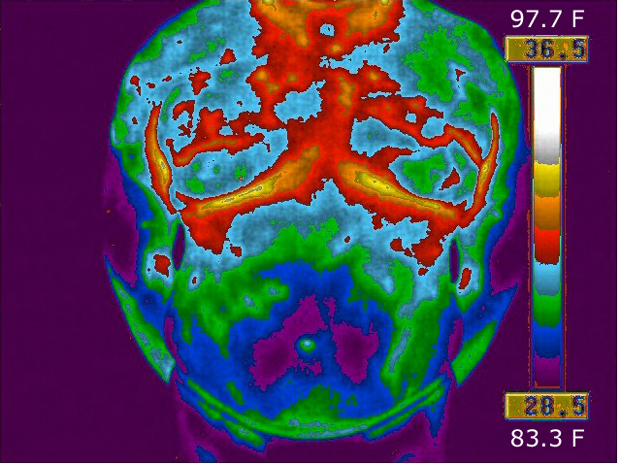 We have already shown that ETS will destroy vasoconstriction in the denerved area. Combined with the disruption of SNS signaling to brown adipose tissue, it is reasonable to think that ETS surgery will diminish the ability to fight cold temperatures.

Given the loss of sweating on the top 1/3 of the body, including the loss of head sweating, it seems clear that ETS surgery will result in a diminished tolerance for heat. As expected, empirical findings indicate that patients do not maintain core body temperatures as well as normal control subjects, and this is true for both hot and cold.

The empirical confirmation for the thermoregulatory problems comes from an as yet unpublished study by David Goldstein at National Institutes of Health. In addition to his published neurocardiology findings about ETS patients, Goldstein has begun thermoregulatory investigations.

The patients are fitted with what Goldstein jokingly calls a “superhero vest”. Water is pumped into the vest, and the temperature of the water can be controlled very accurately. A thermometer probe is placed in the ear to monitor how well the patient is maintaining core body temperature against both the cold and hot water in the vest.

Goldstein has written as his interpretation of one test:

"There was evidence for a decreased ability to maintain core temperature in response to changes in environmental temperature. Taken together, there was evidence for multiple direct and indirect effects of bilateral thoracic sympathectomy that would be expected to interfere with the ability to maintain homeostasis in response to a variety of stressors."

"The patient should avoid extremes of environmental temperature."

A published case study from the Annals of Thoracic Surgery characterizes cold sensitivity as a "new side effect" of sympathectomy. The authors describe a patient who, when "exposed to cold, the right hand and forearm become numb and the skin temperature drops to uncomfortable levels, while the left extremity remains comfortably warm." They also comment on the state of the mainstream literature, noting that sensitivity to cold was "previously unreported". Lowe et al. 2005.

Additional confirmation of thermoregulatory difficulties comes from ETS surgeon David Nielson, whose advertising website has, since 2003, listed “heat intolerance” among the “side effects” produced by the surgery. Nielson website

Besides the general “heat intolerance”, ETS patients have anecdotally reported what they consider to be a “hot brain” syndrome. In particular, Taiwanese ETS patient and robotics engineer “Hpymaker” has made frequent references in the oral history to this hot brain phenomenon. Songboy1234 has also reported a very disturbing sensation like a fever that occurs when exercise is attempted.

Is there any scientific reason to suppose that ETS surgery could interfere with brain cooling, separate from the general thermoregulatory difficulties already shown? This would depend upon whether the normal human has any mechanism to selectively cool the brain; and if so, whether that mechanism is damaged by sympathectomy. The answers are yes we do; and yes it is.
Studies from decades ago began to confirm Selective Brain Cooling. “Cooling of the head skin . . .produces a significant improvement in the performance of heat-stressed humans.” (Kenney, see Williams & Shitzer, 1974).

The ability to selectively cool the brain during hyperthermia (overheating) has long been an accepted fact in many mammals, such as dogs. Dogs have a network of blood vessels in the head called the “carotid rete” which allows heat exchange between warm blood in arteries and cooler blood in veins. The excess heat escapes through the mouth during panting. Humans do not have a carotid rete, so for some time the notion of selective brain cooling in humans was controversial.

However, it has been shown that at 65.8˚ F (18.8˚ C) ambient temperature the deep trunk temperature of a marathon runner may rise to 107.4˚ F (41.9˚ C) with no clinical sign of heat illness (Cabanac et al. 1979; see Maron, Wagner & Horvath, 1977). Michel Cabanac at the Department of Physiology, Laval University, Quebec has been studying Selective Brain Cooling in Humans since the 1970’s, and has evidently discovered the mechanism by which humans accomplish this.

It turns out that certain veins in the face, such as the ophthalmic veins, will actually reverse the direction of blood flow when the body begins to overheat. The blood in these veins is cooled by evaporation of facial sweat, then flows backwards into the sinus and intercranuim area, cooling the carotid artery and the brain.


“The selective influence of facial fanning on human brain temperature can be attributed, therefore, to cool venous blood perfusing the cavernous sinus and possibly cooling the blood of the internal carotid artery.” (Cabanac et al. 1979)

A group of Japanese physiologists at Kanazawa University have been confirming and expanding upon Cabanac’s findings. Their studies subject people to heat stress and exercise, and measure variables such as skin temperature, core temperature, forehead sweating, and blood flow in the ophthalmic vein. They found “that there are elements within the brain that control the mechanisms for switching the direction of venous flow through the emissary veins to keep the brain cool during hyperthermia.” (Hirashita et al. 1992)

Given that this direction-reversing mechanism requires vascular control in the face, we already have strong reason to suspect that ETS would disturb if not destroy selective brain cooling. Is head sweating also important to this process?


“The efficiency of SBC (Selective Brain Cooling) is increased by evaporation of sweat on the head and by ventilation through the nose.” (Nagasaka et al. 1998)

“A necessary condition for SBC is a high heat loss capacity from the head itself, without such a heat loss SBC is not possible.” (Cabanac 1993)

“Because the human head sweats more than the rest of the body, heat loss from the head skin could amount to 125-175 Watts under conditions of moderate hyperthermia.” (Cabanac 1993)

Therefore, given the loss of vascular control after ETS surgery, it is likely that that the control center is unable to reverse the direction of venous blood flow in the face. Given the loss of head sweating, such a reversal of blood flow would likely be very ineffective at selective brain cooling anyway.