(this page still under construction)


Bloodflow to the Brain

The constriction of arteries is under sympathetic control. Post sympathectomy, we would expect an immediate loss of constriction in the cerebral artery, thus more blood delivered to the brain. This is confirmed in the 1999 study by Jeng which found:

Patients who underwent T-2 sympathectomy demonstrated a significant increase in blood flow volume and flow velocities of the Corotid Artery (CA) and Middle Cerebral Artery (MCA), especially on the left side. Asymmetry of sympathetic influence on the hemodynamics of the CAs and MCA was noted.  (Jeng et. al 1999).

Another human study measured a blood flow increase of 40-50% in both gray and white brain matter after sympathectomy.

However, Cannon's Law would suggest that over time, the arteries will become super-sensitive to neurotransmitters, and that small amounts of blood-born adrenaline will serve to constrict the arteries, and restrict blood flow to the brain. Russian researchers appear to have made such a finding in rat studies.


The effect of cerebral ischemia was virtually indistinguishable from the action of Cervical Sympathectomy itself. (Govorova 1982)

"Cerebral ischemia" simply means a condition where there is insufficient blood flood to meet the metabolic demands.  Japanese researchers also noticed troubling results in the brains of sympathectomized rats:


After a 1-hour study, the specific gravity of the cerebral tissue in the treated group significantly decreased; electron microscopic studies at that time revealed brain edema. It is suggested that depletion of brain noradrenaline levels causes a disturbance in cerebral microvascular tone and renders the cerebral blood vessels more vulnerable to hypertension. (Kobayashi 1991)


A 1976 study on rats raised some interesting questions. It was discovered that sympathectomy reduced a rat's ability to learn to escape and avoid. (see Lord 1976) 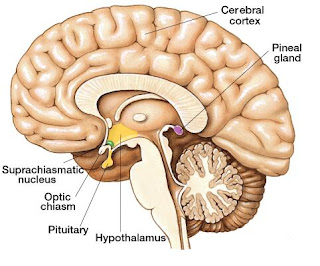 The amount of 6-sulphatoxymelatonin, the chief metabolite of melatonin, in the urine was measured in nine patients, who were subjected to bilateral sympathectomy at the second thoracic ganglionic level for treatment of hyperhidrosis of the palms. All patients showed before surgery had a normal 6-sulphatoxymelatonin excretion with a peak in the excretion during the night time. After the sympathectomy, the high night time excretion was clearly abolished in five patients but remained high in four patients. This indicates that the segmental locations of the preganglionic sympathetic perikarya in the spinal cord, stimulating the melatonin secretion in the pineal gland in humans, vary between individuals. (Moeller 2006)

Owing to the work of psychiatrist / surgeon Timo Telaranta and others, thoracic sympathectomy has been shown effective in diminishing the subjective experience of alertness, fear and excitement. His Privatix clinics in Finland and Italy have operated on thousands of patients suffering from panic disorders, schizophrenia, and other psychiatric conditions. To what extent is this attributable to changes in bodily effectors, and to what extent is brain function altered per se?
Posted by Alexander Baker