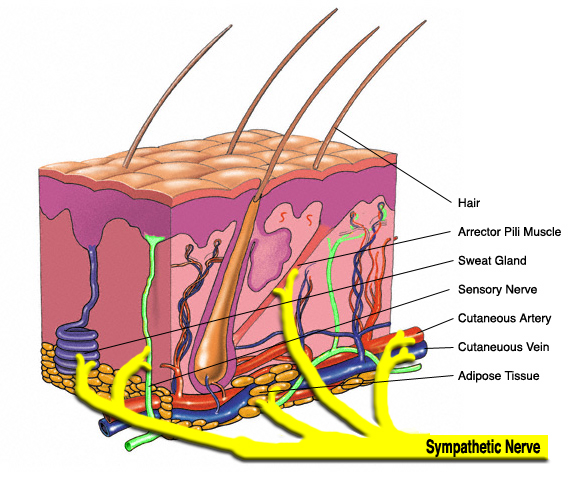 The effect of thoracic sympathectomy is to produce two distinct areas of skin, one denerved and the other still innervated. Over a two year period (2004-2005), Songboy1234 conducted a survey of the skin denervation patterns of 37 ETS patients. The method was simple. The patients were asked, “Which parts of your body still sweat, and which parts don’t?” Also noted was which version of ETS surgery had been performed. Two patterns of skin denervation were found, Pattern I and Pattern II.  Below are the results. 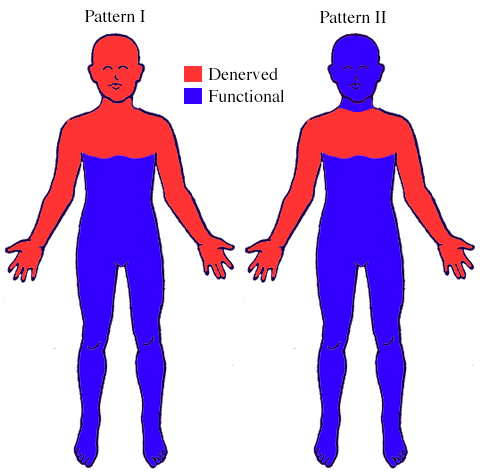 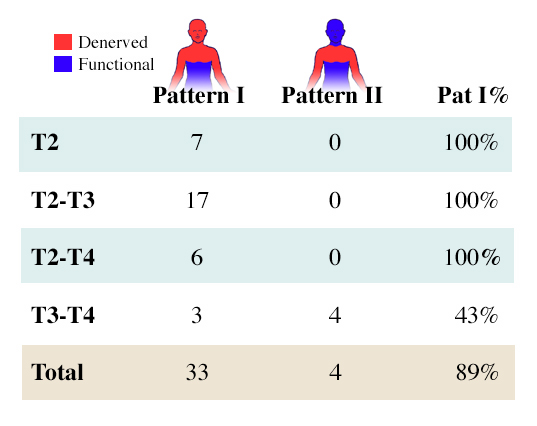 Surgery involving T2 (by itself or with other levels) was significantly more likely to cause full-blown, pattern I corposcindosis (100% vs. 43%). More data of skin denervation patterns are sought. ETS surgeons are called upon to ask the same simple questions and publish their findings.

Sweat glands are controlled almost entirely via the sympathetic nervous system, and do not have parasympathetic innervation at all. Unlike most other sympathetic nerve terminals, the receptors in sweat glands are activated by acetylcholine, not norepinephrine. It is possible that sweat glands can be activated locally to a small degree by catecholamines in the blood, but for practical purposes sympathectomy renders sweat glands permanently non-functional in the denerved area. This dysfunction is called "anhidrosis".

Anhidrosis is considered dangerous, as we learn from the WebMD dictionary:


Anhidrosis: Not sweating. From the Greek an- meaning a lack of + hidros meaning sweat = lack of sweat. The inability to sweat may seem a blessing but it is not, since to sweat is to be able to stay cool. Anhidrosis creates a dangerous inability to tolerate heat. (WebMD dictionary)


In one clinical trial, ETS patients subjectively described the sensation of anhidrosis as “disturbing”.


The disturbing, dry, hot sensation of anhidrosis can be severe enough to require the frequent application of hand lotion. As shown below, the extreme dryness can develop into a form of eczema (see Niinai et al. 2004) 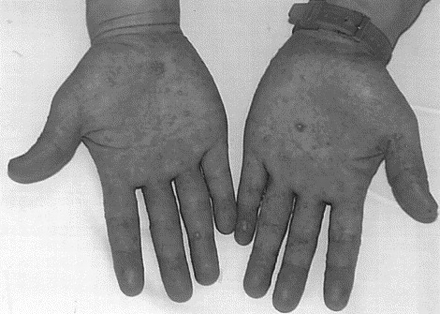 Eczema on the Hands After ETS Surgery

A strange symptom of corposcindosis is “gustatory sweating”, properly known as Frey’s Syndrome. Rare in nature, this is common and well-documented after ETS surgery, usually manifesting many months after surgery. Upon eating or smelling certain foods, particularly those that are sour or spicy, the patient can experience tingling or sweating sensations along the arms, in the forehead, or other denerved areas. Classic Frey’s Syndrome is caused by injury to or near the parotid (saliva) glands, below and in front of the ear. The mechanism by which ETS surgery causes Frey’s Syndrome is unknown.

This is puzzling. How can olfactory stimulation trigger upper-body sweating, when exercise and hot temperatures cannot?

ETS patient and discussion board administrator “Elaine” aka “Aubrey”, has offered this: “(Gustatory Sweating after ETS) is caused by aberrant nerve regeneration. Messages to salivate cross with messages for sweating, flushing and goosebumps.” (Elaine 2004)

Though the mechanism is not known, clearly olfactory sensation somehow is able to active sympathetic activity in the denerved region. If we could understand the mechanism, perhaps we could harness it and re-establish sympathetic tone where corposcindosis patients so desperately desire it. I call for research. Patients should be warned about gustatory tingling and sweating.

As a defense against cold temperatures, and more importantly in response to certain emotional stimuli, the control center can increase sympathetic tone on arrector pili muscles. The tiny muscles contract, which pulls the skin down in little patches, leaving the remaining patches raised, thus forming “goose bumps”. This increases the total surface area of the skin. Greater surface area means better insulation, so core body heat will escape more slowly. The thermoregulatory effects of goosebumps are minimal, and some consider this effect to be a vestigial artifact inherited from our hairier mammalian ancestors. However, the emotional importance of goosebumps to humans cannot be overlooked.

Emotions such as fear, sexual arousal, pride, awe, nostalgia and joy can trigger strong goose bumps. This can be accompanied by a physically pleasurable sensation that some describe as “nearly orgasmic”. A strong neural signal is sent from the control center down to the base of the spinal cord, where it branches off, left and right, into the lumbar regions of the sympathetic chains. It begins traveling upwards in a wave, branching off into each sympathetic ganglion, stimulating goose bumps and physical pleasure in each innervated region, while continuing up the chain. Eventually it reaches the thoracic ganglia, which deliver the signals to the arrector pili in the neck. This gives rise to the expression “making the hairs on the back of the neck stand up”, a phenomenon observed in all mammals. Finally, the wave will descend down the arms and around the scalp, completing the process that may last several seconds. Many people find this experience profoundly pleasurable and satisfying. Entire websites have been dedicated to extolling the pleasure and emotional satisfaction derived from goose bumps.