Medicine is an Experiment


All of medicine is an experiment. R.Buckminster Fuller famously said of our planet, "Now there is one outstanding important fact regarding spaceship earth, and that is that no instruction book came with it.". The same can be said of the human body. We didn't get an instruction book. Our current considerable knowledge has been gained through centuries of trial and error. The human condition is fraught with, almost defined by, suffering of all sorts. We desire to ease our suffering, to cure our ills, but we don't know how. Thus is born medicine.

Suffering can be physical, or it can be emotional. For example, some people sweat excessively, or at inappropriate times. Others blush. These are physically harmless conditions, but can cause great embarrassment. We know that sweating and blushing are regulated by the autonomic nervous system, so it is logical to look there for some understanding of what causes these problems, and for how to treat them.

A Brief History of Sympathectomy

Scientists became fascinated with the idea of sympathectomy in the mid-19th century when it was learned that the autonomic nervous system runs to almost every organ, gland and muscle system in the body, and it was surmised that somehow these nerves must play a role in how the body is able to automatically adjust levels on many different body functions in response to changes in the environment, exercise and emotion. They wondered how exactly it was that the autonomic nervous system was able to do all that, and they wondered what might change if various parts of it were cut out.

The first sympathectomy was performed by Dr. Alexander in 1889. Since the sympathetic nervous system was well known to affect many body systems, the surgery was performed in attempts to treat many conditions, including idiocy, goiter, epilepsy, glaucoma, and angina pectoris. Thoracic sympathectomy has been indicated for hyperhidrosis (excessive sweating) since 1920, when Dr. A. Kotzareff showed it would cause anhidrosis (total inability to sweat) from the nipple line upwards.
A lumbar sympathectomy was also developed and used to treat excessive sweating of the feet and other ailments, and typically resulted in impotence in men.

Sympathectomy itself is relatively easy to perform; however, accessing the nerve tissue in the chest cavity by conventional surgical methods was difficult, painful, and spawned several different approaches. The posterior approach was developed by Dr. A.W. Adson in 1908, and required resection (sawing off) of ribs. Sales of the procedure were slow. Dr. E.D. Telford came up with a supraclavical (above the collar-bone) approach in 1935, which was less painful than the posterior, but was more prone to damaging important nerves and blood vessels, also not a good selling point.

Because of these difficulties, and because of disabling sequelae associated with sympathetic denervation, conventional or "open" sympathectomy was never a very popular procedure, although it continued to be practiced for hyperhidrosis, Raynaud's disease, and various psychiatric disorders. With the popularization of lobotomy in the 1940s, sympathectomy fell out of favor as psychosurgery.

The endoscopic version of thoracic sympathectomy was pioneered by Drs. Goren Claes and Christer Drott at the Boras hospital in Sweden in the late 1980s. The development of endoscopic "minimally invasive" surgical techniques have made possible the mass-marketing of sympathectomy, and today ETS surgery is practiced in many countries throughout the industrial world.

Websites advertising ETS surgery abound. These sites typically feature patient testimonials deploring the embarrassment over sweating and blushing, and extolling the virtues of the surgery. The long and checkered history of sympathectomy is not usually revealed. Following is a sampling of ETS surgeon advertising websites.

"Surgery only eliminates the pathway to the sweat glands of the hand."
"Based on the clinical data that has been published to date, there is no evidence that ETS surgery has any negative impact on cardiac function, or the ability to reach preoperative peak work loads."

"Mayo Clinic's surgeons frequently perform these procedures for severe over-sweating of the hands when other treatments have failed," says Dr. (John) Eisenach. "From an integrative standpoint, we are interested in studying the long-term effects of this surgery on the skin and blood vessels of the arm. So far, we have found essentially no adverse consequence in the patients' warm and dry hands."

"This procedure involves cutting the nerves that carry messages from the sympathetic nervous system to the sweat glands and completely removing part of the nerve chain. This surgery permanently interrupts the nerve signal that causes the body to sweat excessively."

Before long [after ETS], patients are back to their normal daily activities, minus the excessive sweat.

Of course, the surgery actually has quite minimal side effects and a 95 percent or better chance for a permanent cure.

Are there any side effects? Very few.

Hyperhidrosis presents a variety of problems physical and emotional for those afflicted with it:

What happens to the other nerves in the chest [after ETS surgery]?
The sympathetic nerve chain has a built in "backup" system. Other nerves compensate for the function of the removed nerve region, and there are little or no long-term side effects.

"Surgeons have developed an operation to cure blushing."

If you've been suffering with hyperhidrosis, see your doctor. There is help available. One treatment, pioneered by (UCLA surgeon Samuel) Ahn, involves minimally invasive surgery to snip the sympathetic nerve connection to the hand. So far, says Ahn, the operation has been 100% successful, with no negative side effects.

"ETS surgery turns off the nerve the signals the body to sweat too much." 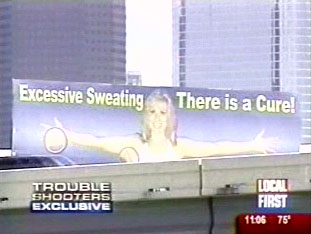 Surgeon Jim Garza promises a cure with his attractive sign by a Houston Texas freeway. Garza and his practice was the subject of a 2005 investigative journalism piece by CBS2 news Houston, as part of their 'TroubleShooters' series.

ETS surgery has been featured as "product placement" on the hit television series "Grey's Anatomy". Grey's Anatomy is fictional, but prides itself on medical accuracy, employing the consultation services of Karen Pike M.D. On the show written by Shonda Rhymes, character Kelly Roche (played by Angela Gothels) has an embarrassing problem with facial blushing. 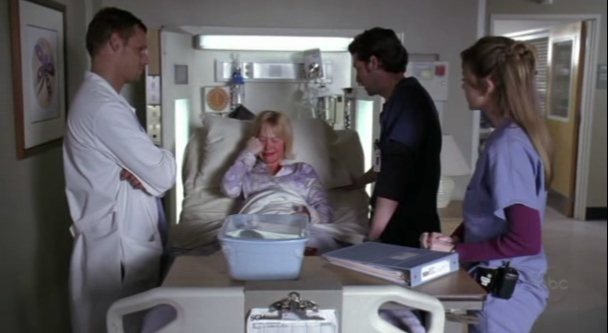 Though other characters do not appreciate her situation, Merideth Grey (Ellen Pompeo) offers warm empathy. The show makes a point of having Kelly Roche recite an apparently exhaustive list of potential side effects:


DR. SHEPPARD: "Did you read the literature I gave you? Do you understand the possible side effects?"

KELLY: "Compensatory sweating of the back, abdomen, thighs and legs; possible gustatory sweating; Horner’s syndrome occurs in less than one percent of patients; brachial plexus injury, pneumothorax and hemothorax are highly unlikely but possible side effects of the surgery."

DR. SHEPPARD: "You did your homework! Take her to pre op. I’ll alert the O.R." 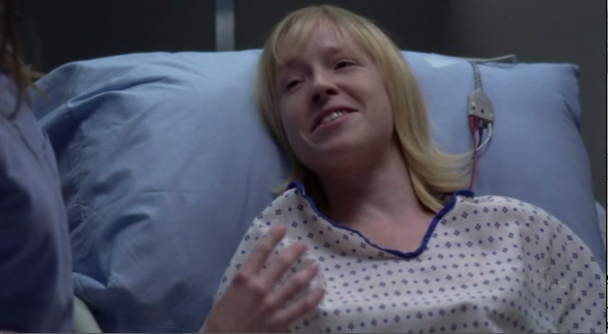 In the recovery room, Kelly Roche is deliriously happy now. She is able to say Dr. Sheppard's name without blushing.

Surgeon Derek Sheppard (Patrick Dempsey) performs the ETS, and by episode's end, Dr. Grey declares the operation "successful", "worth the risk", as a happy Kelly Roche relaxes in her recovery room.

Is the mainstream positive characterization of ETS surgery correct? A survey of ETS patient oral history, as documented in several websites and discussion forums, would seem to indicate something far different. By the mid 1990's, a site called FFSO - people disabled by sympathectomy had been launched in Sweden, birthplace of ETS.ETS came to the U.S. in the late 1990's and had become widespread by 2002. ETS discussion forums like ETS & Reversals, ESFB, and No-ETS began to appear.

Comments on these ETS discussion boards tend to run at least 75% anti-ETS. On them, ETS patients complain of a myriad of symptoms. Often they describe being completely unable to sweat from the entire top 1/3 of the body, yet having the slightest physical exertion trigger profuse sweating in areas like the belly, lower back, and crotch.

They also complain of a weak heart beat, shortness of breath, painfully dry hands, a hot temperature on the top part of the body, loss of goose bumps and the pleasurable ‘chills’ sensation that goes with them, chronic fatigue, loss of alertness, loss of strong emotions, sexual dysfunction, and more. Like the earlier FFSO, another common theme on these ETS discussion forums is that surgeons are unresponsive to patient complaints.

In January 2008, "Mia" began the Sympathectomy Blog, which presents a vast archive of empirical data on sympathectomy.

"What you see here is not a result of the surgery gone wrong, this is the result of a ...successful operation; it is the inevitable consequence of cutting/clamping the sympathetic chain, independently of skill of the surgeon, experience of the surgeon, T2, or T3, T4, or method used. Once the communication is disrupted, (and it happens with the clamping as well), it will disable the body's thermoregulation and will cause malfunctioning of the sympathetic nervous system. This damage is permanent and irreversible."

The most prominent discussion board on the subject is ETS & Reversals. Its members overwhelmingly offer anti-ETS viewpoints, detail their experiences, seek remedies, and offer advice for those who have had ETS, and for those considering it. 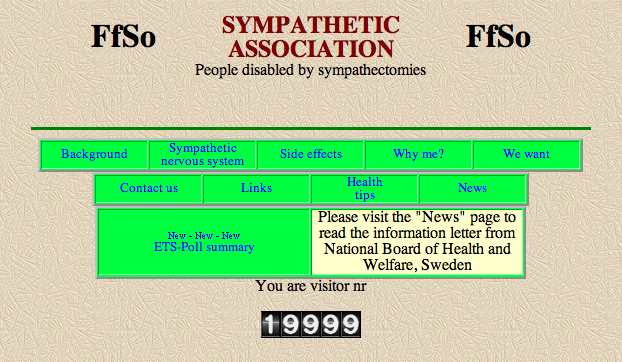 FFSO lists the following as side effects of ETS surgery:


"Many of the symptoms are similar to those that come with Chronic Fatigue Syndrome or Fibromyalgia.Most of us have in some way been forced to change our way of living. Physical exercise is almost impossible for us. Some have found it impossible to continue with their profession and felt that they had to find another job. Some have even lost the ability to work and have gone in early retirement."

FFSO also documented another troubling aspect of ETS, having to do with the attitude of the operating surgeons:


"Several members in our association have, when the symptoms occured, contacted the operating surgeon to ask if this is a consequence of the operation. The answer has always been that they never have heard of these kind of side effects, YOU must be an exceptional case!"

TruthAboutETS was created by ETS patient "songboy1234". The site offers many articles based on songboy1234's personal experience, including his participation in a neurocardiology study at U.S. National Institute of Neurological Disorders and Stroke (NINDS). (see U.S. Government Studies the Neurocardiologic Dysfunction of Sympathectomy Patients


TruthAboutETS reports a long list a potential side effects:


No a la ETS home page 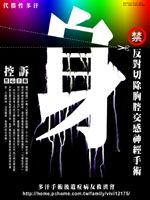 The Chinese symbol means "ETS is like cutting the body in two". The rest of the poster is a warning to patients, and a protest to Taiwaneese health authorities.

"The Truth of the Sympathectomy"
"This video is a Taiwan TV talking show broadcasting on Oct 24th,2006 which inviting some famous medical reporters. The reporters disclose lots of scandal and illegal behavior about Taiwan DOCTORS who lack of conscience." YouTube


In addition to the physical symptoms, Alexandra Parker complains of emotional changes. She says, "It's just a feeling of being dead.".

What is the truth? Does ETS surgery really cure excessive sweating and/or facial blushing? Could this mainstream, mass-marketed surgery really be responsible for all the problems detailed on the patient websites and discussion forums? Or are the patients simply trying to assign blame for things unrelated or imaginary? Is there theoretical or empirical justification for the litany of patient complaints? Or not?

If there is merit to the patient complaints, it would imply that there is routine deception taking place on the part of the surgeons. Is this possible? Sadly, tragically, the past case of lobotomy offers an historical example in which surgeons portrayed a disabling procedure as safe and effective. A nobel prize was even awarded to lobotomist Egas Moniz.

Is ETS the new lobotomy, in the sense of a grand deception being foist on vulnerable, unsuspecting patients? Or is it a safe and effective treatment for excessive sweating and facial blushing? This treatise is an attempt to resolve the dispute scientifically.